Above is a scatter plot of Heating Degree Days (HDD) taken from Weather Underground data from the weather station in Springfield VT. Not exactly Newport, NH but close enough for this graph. It’s important to note that the beginning of October was quite nice which resulted in a fair number of days of timed burns, starting the boiler at 4 pm and running it until 9 pm for example. It quickly became obvious with Novembers below average weather that this would not result in satisfactory comfort and the boiler has been running continuously for most of the month. The trend-line looks like you would expect to see it, but the scatter data is quite varied. It will be interesting to see if this data correlates better as the winter continues.

You may remember I added a function to collect HDD data at one point, however it never seemed to work as well as it should have so I stopped using it,  I am now considering reviving a variation of that function using an array for the max and min hourly numbers to get a more accurate HDD local number.  I’ll post the code when I finish.

The view from April, Daylight savings time adjustment for your RTC

The boiler has worked flawless all winter, I am happy with the software and hardware but with all things mechanical there is room for improvement. I have just started my 7th ton of pellets. And I really don’t want to get into my 8th and don’t think I will have to, especially if I institute some energy conservation in the software. This is the time of year that I would normally burn what my grandmother called a “trash fire”. In her case it was some cardboard boxes from the trash and maybe an odd shaped piece of wood or two. Just enough for 3-4 hours in the evening, letting it burn out overnight since the days get up to 40°F or 50°F there’s no need for more fire than that. Later in the month most of the nights will be above freezing. But I still want to light the boiler in the evening mostly for the hot water and then turn it off at 2-3 am, so I wrote that into the software and it has gotten the consumption down to 1-2 bags per day. I also added a function in the software to change the real time clock for Daylight savings time and back automatically. It’s not fully tested but I think it will work OK.

void SpringForward(){//start function
DateTime now = RTC.now(); //get the data from the RTC
now =now.unixtime()+3600; //subtracts an hour from the time
RTC.adjust(DateTime(now.unixtime())); //resets the time to an hour earlier
DaylightTest =1; //flag variable so it won’t go back in time continously
}//end function

void FallBack(){//start function
DateTime now = RTC.now(); //get the data from the RTC
now =now.unixtime()-3600; //subtracts an hour from the time
RTC.adjust(DateTime(now.unixtime())); //resets the time to an hour earlier
DaylightTest =1; //flag variable so it won’t go back in time continously
}//end function

Good test for the boiler with -5°F overnight temperature

I restarted the boiler with a friend on Friday afternoon on the 13th of January.  At present it is Sunday morning at 6:45.  Thirty nine hours since starting, in that time the temperature has dropped to a low of -5°F which is the current temperature and the fuel usage has been a total of 5 bags.  The house is still comfortable and has not shown any dip or problems in maintaining temperature.  The only noticeable differences are two things.  The lack of the oil fired boiler running which I can hear upstairs and always makes me a little twitchy.  The second difference is the temperature of my office.   My office is off the utility room which holds the furnace and so is normally quite warm after a cold night.  Today it is the temperature the thermostat is set to maintain.

So is that accurate?  That was a lot of math using some not very exact calculations.  The math was done correctly but Heating Degree Day calculations are notoriously rough.  Many oil companies have moved onto more sophisticated methods and of course this is just a snap shot of one day.  But as an reality check  at this point I am confident 5 tons of pellets would easily get this building through the winter for a total cost of $1075.   If I used 800 gals of oil throughout the heating season this would cost me $3080 at a cost of $3.85 per gallon.  So yeah I think the numbers are reasonably accurate if not conservative.  Wait until I try chips at a cost of $40/ton……too fun.

The chain arrived from McMaster-Carr last night so today a friend and I hooked up the drive motor for the auger and we did a timing test.  The assumption is the pellets will yeild approx. 5000 BTU’s per pound.  So after running the auger for a minute we weighed the sample and with the weight we calculated the feed rate at approx. 30 secs every 2.5 minutes.  We will have to adjust the rate as needed for the test.  I got a great email from a friend with some useful suggestions for the code which is still having issues.  I incorporated all the suggestions  and look forward to more useful suggestions. 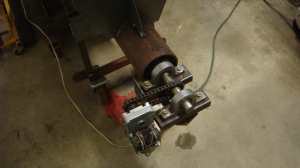