I often have to cut multiple parts, so when I do, I take the opportunity to experiment a bit.  In this series of cuts I changed the amperage of the Plasma cutter, a Hypertherm 45.  Hypertherm plasma cutters are American made, designed and built, only about a 45 minute drive away from me.  I still haven’t gotten my free T shirt for buying and registering the machine but I guess that’s another story…  anyway, amazingly enough there really is not a lot of difference in the dross or slag between the three different amp settings I tried.  I’ll keep experimenting to try to optimize the cut quality and speed of the CNC machine, plasma cutter combination.

The auger pipe connects the burn plate which attaches to the boiler and forms the interface between the auger feed and the boiler/burner units.  I took a piece of 6″ pipe and welded it to the boiler plate and this attaches the plate to the auger feed via screws that tighten. With this assembly I can detach the auger and hopper and test a different burner simply by loosening 6 screws. Modular design for ease of design changes and maintenance.

I attached the hopper plate first because this determines the wheel height required. I slotted the holes in the saddle plates so that there is about 3/8″, or about a centimeter of adjustment up or down adjustment.  Then after careful alignment I assembled the entire assembly with clamps and threaded rods. I did cut and weld in some cross pieces with gussets 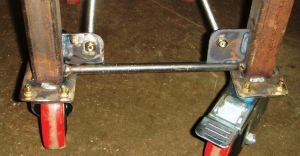 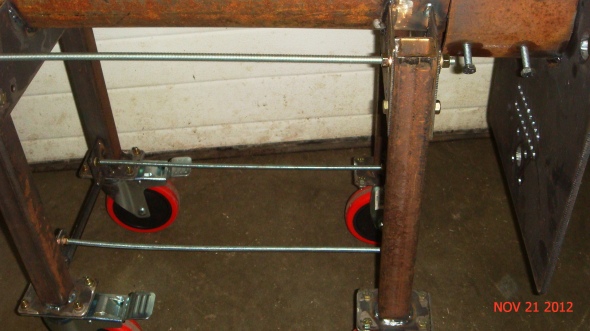 Close up of carriage assembly welded to auger tube

This will make maintenance of the boiler, ash removal, scraping of the burner holes, boiler tube cleaning very easy by simply rolling the auger/hopper assembly out of the way.