← Back to the drawing board
Changed feed sprocket → 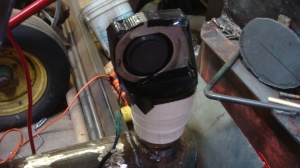 To increase the combustion efficiency a second fan was added.  The smoke coming from the boiler was very thick at times and really needed more oxygen.  So a second fan was added, to help add more air and help keep the chip feed area cool.  The parts slip together and allow a quick look down into the burner area.  This allows you to be able to visually check on the feeding, and the fire by simply lifting the fan.  So far I am happy with the change and the biggest difference is the ability to see the feed rate appropriateness.  Already I want to change the program to allow smaller bites less often because the fuel is backing up the feed pipe.  Because of computer issues, the laptop I was using wouldn’t  recognize the USB port the Arduino is plugged into more than one or two uploads, I am attempting to switch computers.  The 2nd computer at my disposal is running Windows 7.  Not nearly as easy to use as XP Pro that I am used to using in opinion.

So, I am having difficulty communicating with the Arduino.  I may have to go back to the first computer.  Ain’t computers grand?  I am a lot happier with a welder and plasma cutter.  My weight this morning was 193.8, down 1.9 lbs.  Probably water weight although I have stopped drinking beer for a little while.   Ham sandwich in every bottle so a friend once told me.