Back to the drawing board

The increased air from the second fan did  improve the smoke and make the inlet fuel pipe even cooler. It also enabled me to have a  viewing port to see if there is flame or if the fuel was adding as expected.  But two things happened, the fuel did not flow out of the way so at the bottom of the pipe there was a scree field of pellets which did not move until the previously feed fuel had burned.   This situation makes the feeding control very critical.  The pace of the feed must be the same as the pace of burning.  This alone makes the design unworkable, the process must be more robust than to require advanced combustion calculation, measurement or observation.

The second problem observed was the area of combustion across the pellet field is limited the  area of the roughly  trapezoidal shape that was formed.  This area is significantly smaller than the area of the burner trough.  Consequently two things are learned.  One the area naturally formed by the falling pellets is insufficient to maintain the water temperature required for my needs, as evidenced by the boilers inability to get past a temperature of approximately 130°F.  This alone also requires the redesign since the whole idea is to heat the house. The second conclusion is the area is directly related the heat making capability and thus sizing a burner to a house and feed system is probably quite doable.  This seems obvious in statement however,  I was thinking that factors such as air volume and burner efficiency would play a larger role.  At this point I think I can tailor the BTU’s by burner size and design.  I think I will start with the more modest goal of getting the damn thing to work for more than a day. 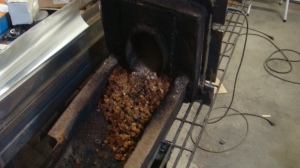 I’ll admit to being a bit discouraged, however, as January’s calendar said, ” Character consists of what you do on the third and fourth tries”.