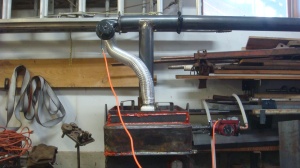 I changed the configuration of the exhaust fan to pull the intake air from the top of the furnace to the exhaust pipe, which continues down the pipe to help create a vacuum to pull more air from the furnace.  I also used hi temp caulking to close up more leaking area making the boiler much tighter.  The positive draft, not quite a vacuum and the caulking allowed the furnace to heat to the set point of 160°F and turn on the circulator pump without filling the shop with smoke.   The shop did eventually get quite smoky so I shut the boiler down to allow addressing the smoke issue.

The boiler water circulated through the oil fired boiler loop.  I turned up the thermostat in the shop to include the shop to be heated and use some of the hot water.  The circulator turned on and off several times in response to the returning cooler water, but eventually managed to maintain the water temp for the most part.  I probably only ran the boiler for 2 hours total and only 1/2 hour to 45 minutes with the circulator pump on.  Great test run though.

The software is still in the prototype stage as well.  I wired a potentiometer into an Analog pin of the Arduino to set the on time of the Auger.  The dwell time (off time) of the Auger is a fixed 50 seconds.  I made the program so that the on time is some percentage of the off time.   So the potentiometer can turn the Auger up to a 50 second on time or down to a 1 or 2 second on time.  After the first burn it was apparent that changing the parameters on the computer, compiling and uploading was a pain so I wired in a hardware solution.  The next iteration of the software needs to have some error checking and data smoothing added into the program to allow the program to make more informed decisions and stop the relay chatter on the circulator pump.    So considering I am babysitting today, actually I was told it was parenting, I think I will stick to software upgrades and maybe go to Aubochon’s to see if they have braided fire insulation to seal the burner unit and lighting doors.  I think I may order some over center latches for the lighting door to allow easy access but tight sealing and of course more caulking.

The LCD stayed perfect all day yesterday, the other change I made was to put the relays on a separate power supply.   I also added back in the clock which does not seem to be a problem to the LCD.  The other thing I can productively do today is order another clock and Uno so that I can build another enclosed box to run the thermostat.  I miss having the outside temp on my desk and last night since the Arduino was tied up on the boiler I had to be the thermostat for the solar tank.  WTF?