I  added  gasket rope which I bought at a local hardware store, which is made to replace the gasket material which comes in a wood stove door between the burn plate and the boiler.  This gasket changed the Magnehelic vacuum reading from .1″H2O to .4″H2O.  That I thought would make the flame a bit more vigorous.  I also made the holes in the bottom of the burner larger to allow the ash to fall through.  Lastly I made minor changes by tacking some material across some holes and making more air holes in the ramp plate which the pellets fall down. 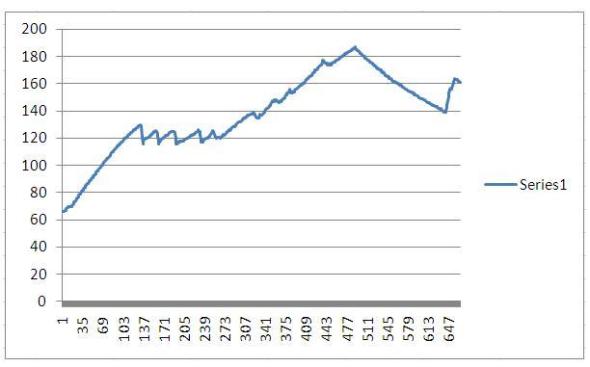 The main differences in this graph and the previous day’s graphs are at approximately minute 273  pellets were added and the sawdust which had been running finally ran out.   As you can see it had enough energy density to overcome the demands of the circulator circuit.  The biggest problem after that came at about 341 when the program allowed the temperature to go past the set point of 140°F  The only explanation I could come up with is the division by different types of declared variables was not allowed and yielded a result of zero.  I was dividing an unsigned long which is an integer by .8 to increase the Auger Off time by 20%.  Since you will not get an integer when you do this the program may not have liked this result.  The Arduino language is a slight variant of C++ .  I have since made all the variables doubles we’ll see if that works.  Today’s burn will be a better test of the burner floors ability to let ash fall through.  Sawdust is very difficult to burn.  It’s also difficult to get the ash to fall through the burner floor.   I think this is because the air cannot get around the sawdust sufficiently to burn it completely and hence it smolders in clumps instead of falling through the grate.    The burner when I pulled it out to inspect it was definitely not clean of ash but did appear better than yesterday.

More Testing, another day, another graph

Tank Temperature vs. Time in minutes

would add more power.  I’ll let the graph speak for itself.   Note the issue at 45 or so minutes in where the temperature started to drop.  At this point the sawdust bridged so badly it wasn’t feeding any fuel.  After I poked the sawdust in the hopper, the temperature continued to rise.  I had to continue to poke the pile to get the feed rate to be somewhat normal.  Looks a lot like yesterday’s graph, so I am thinking about adding some additional air through a forced draft fan on the front end of the process.   Once again the burner did do the job but slowly and until approx. 379 minutes or a little more than 6 hours into the test did the temperature rise past the point where the circulator turned on.  I measured the chamber pressure, in this case vacuum and it measured .1″ H2O so additionally I am wondering if I need a larger exhaust fan as well.

I ordered a Magnehelic gauge from Dwyer Instruments  that measures plus or minus 2″ of water column.   This allows you to take pressure or vacuum readings within a limited range around atmospheric pressure.  Observe the nipple in the picture below.   To test the burn chamber I took my plasma

After that initial test in an uncleaned condition the system was taken apart and the second pipe was blocked.  After reassembly the testing was done again and the burn chamber vacuum rose.  This indicates that the venturi effect we thought we were inducing was not working.  By changing fans and cleaning the soot out, we were able to induce a vacuum of .85 in the burn chamber.  At this vacuum the smoke observed was non existent, but the exhaust pipe was significantly hotter than in the previous configuration indicating more waste heat.   So tuning the vacuum and monitoring the vacuum makes sense and may be an integral way to test the cleanliness of the pipes as well as the required O2 of the burn process.  To that end I am going to order a pressure gauge on a chip and see if I can get a reading to be monitored by the Arduino control system.    After burning in the .85″ vacuum configuration it became apparent that smoldering in the auger pipe was taking place and the system was shut down safely to allow more work to be done.  At this point it appears that .05″ H2o is insufficient and .7-.85″ is too much so a damper or variable fan drive is required to allow burn chamber vacuum adjustment.

Last night I went over the remaining issues with my girlfriend.  So here is the list and the possible fixes and approaches to each item.

1) Smoke.  There is still some remaining minor smoking issues. Possible fixes, better caulking, stronger fans, a wind baffle, burner redesign?  Pipe cleaning?  I think I will start with a wind baffle and some better caulking, next furnace will have a better gasket design.  I also have ordered a Magnehelic to help determine the normal static pressure so that a baseline can be established and tested against.  The boiler is working so ordering fans without more facts would be a expensive trial and error process.

2) Feed issues.  There continues to be an occasional feed issue.  So much so that today I am  going to take the burner off the boiler and see if I can determine the binding issue.  Possible solutions?  Increase in torque, already ordered more sprockets.

3) LCD issues.  The problem has been traced to the relay and I think needs some old fashioned power regulation, no doubt involving a capacitor to remove the spike when the relay is released.  Possible fixes, ordered an LCD backpack to free up some IO and also allow only one power and ground to go to the LCD.

4) Hopper Extension.  3 bags per day means a bag every 8 hours, no all that conducive to being able to leave for a day long event.

5) Data logging.  Tuning the machine is always the fun part and so dependable data logging needs to happen.  I ordered a SD card writer.  This should allow the internal Arduino software to work with the card independently of Windows XP which seems to have problems with continual or repeated Arduino upload.  I also plan to test the upload and communication with a Linux operating system.

Back to work!  Today I built the wind baffle and so after the auger is clear back to the experiment.