Well of course there’s fire in the burner that’s how it works. After today however the Arduino should be able to sense the fire since I added a photo resistor,  commonly known as a flame sensor, bought at a furnace supply store. With the Arduino’s ability to sense flame, the addition of automatic self starting should be enabled.  The ability to determine if fuel is building up should also add safety to an already proven safe unit.

The sensor I obtained is a flame sensor used in a normal oil or gas fired burner.  The flame sensor allows me to sense the light corresponding to a fire currently burning. The sensor cannot determine if the fire went out or if the flame sensor can no longer see it but functionally it makes no difference to me.  I am interested in either condition and the response is the same to both conditions, turn off the fuel feed.    If the fire went out, no need to keep feeding fuel, that will simply clog the  feed chute and make a mess.  If the fuel has backed up the feed chute so much as to shield the flame sensor, there is excess fuel, turn off the fuel feed.  Physically the sensor is mounted to “look” through the back of the feed slide.  This positions was chosen purposefully to determine if fuel was backing up.

Because the flame sensor is a resistor, I am using a voltage divider circuit to measure the voltage and then using the software to check the voltage with a if – then statement.  The software determines if the voltage is high enough to indicate flame or too low indicating dark.  I have been  recording various sensor data to the micro SD over the heating season, so I will record the voltage overnight and we can see the range of data tomorrow.  If anything this should be a good time of year for the test since the fire is needed to maintain the temperature in the building, it is mid 30’s F here today, but the fire is not required to be too vigorous since the temperature is not extremely cold.

Fuel savings built into the software

I added a function to check for the time of year and hour of day to shut the boiler down automatically, I mentioned this in the last post. But as the days get warmer I wanted to make additional changes. I probably ought to be calculating the HDD and comparing to the present outside temperature to calculate a dynamic time needed for adequate heat, however that seemed too complicated so I wrote a simple function to check for date and time. At this time of year it shuts the boiler off at midnight. In March it ran until 3 am.

Electrical box and paint, Step 7 of a DIY record

It took me longer than I would like, but the hopper/auger assembly is now painted and the electrical box is mounted and the wiring is functional.  I have mounted the Arduino and LCD display.  That box also contains the board that accommodates the thermistor electronics, which are the sensors that read various temperatures.

The main electrical box is a stainless steel box  I picked up used from a scrap yard, putting the frugal in frugaltinker.com.  That’s the reason that there are so many holes in the box,  however it was such a good deal I thought it was worth it, despite the cosmetics.  The cover was just too ugly to leave be, so I attempted to skin the cover with a plate which I plasma cut in “Frugaltinker.com”.  This doesn’t show up too well, I probably should paint a background behind it to make it stand out better. Painting a background seems low on the to do list right now, so I think I will skip that task and focus on the burner.

The CNC was invaluable in the production of the electrical mounting plate, mounted inside the electrical box.  It was great to not have to drill any holes to mount anything.   All the holes were cut with the CNC and fit just fine.

So the final task is complete before the burner is welded up and tested.

In this step I mount the auger drive motor, it has a built in right angle drive and speed reducer which adds torque.  The motor comes complete ready for wiring and mounting using four screws.  Again I drew up the parts in SketchUp and then cut them out on the CNC plasma cutter, it was almost too easy.   The further I get down this path the more I take advantage of the CNC’s capabilities.  Note the rounded corners, I also added an extra hole on top of the motor mount plate to make adding a wire routing clip easier in the future.  I remade the worm drive plate to improve some of the adjustment capabilities and added at the same time some decoration, rounded corners and used less material.

I used a Lovejoy type shaft connector to connect the motor to the worm shaft with a Buna-N spider in between to minimize any vibration or backlash to the motor, although with the worm and worm gear combination there should be none. 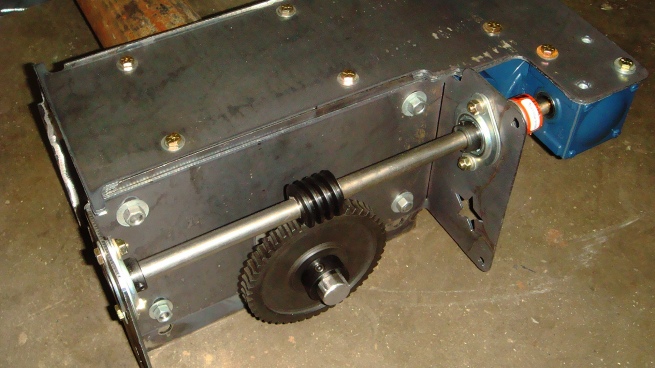 After last winter’s experience,  I  decided to start from scratch on the auger/hopper assembly.  I varied the height several times through different burner designs.  Now it looks  like it was modified once too many times.  The other main reason to rebuild the hopper assembly is the difficulty removing the burner from the boiler because it must stay balanced.  I don’t remember exactly my thoughts at that point, I probably just had two wheels around the shop and was in a hurry.

So this fall I am rebuilding the hopper with a different auger drive system, and additional wheels and supports to make it much more robust and simple.  The foundation of  improvement in the new assembly  is the ability to draw the parts in SketchUp as well as cut the parts with the CNC. Here’s a view of the cut out parts. 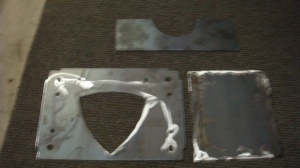 The parts laid out I call the saddle, angle iron, and side alignment plate.

Finally here is the assembly on the welding table ready to weld, note the threaded rod, which also aids in the rigidity and ease of adjustment to make sure all the pieces are square and parallel prior to welding. 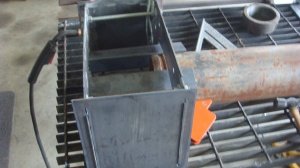 And finally the partially finished welded assembly, this assembly will be the foundation to cantilever the auger in the feed pipe as well as support the auger drive motor and gears.

End view of the welded assembly