After running for a few days I have been happy with the amount of holes in the bottom of the burner, the ash level when running does not get higher or lower.  However the fuel usage is a little higher than I thought it would be and the program does not hold the set point temperature as well as I would like.  The graph shows the interaction of the excess fuel usage and the set point.  At times the boiler should be idling along with very little fuel feed, the program should be able to determine the fuel usage needed to control the temperature to the set point. 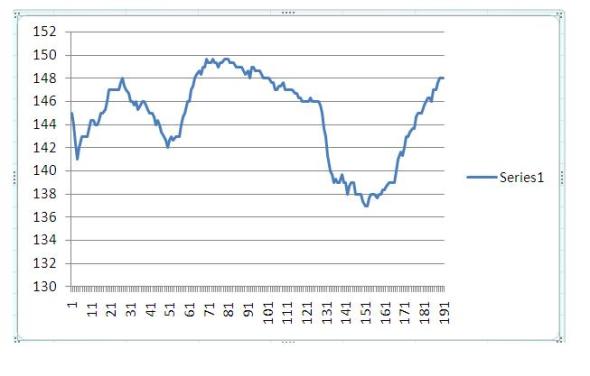 You can see the 140°F horizontal grid line, the set point is currently 140°F. The integral of the area over that line is excessive fuel usage. However that’s not the only issue, the second issue is the amplitude seems to grow larger until approx. 121 minutes.  At that point I shut down and started a new software change.    You can see the slow recovery as I had to relight the fire and then the software starting correcting earlier, so in short more software changes are in order.    The challenge is to build self correcting software since the whole goal of this project is to burn chips and that will require the software to deal with different energy densities.  I’ll make a few more software changes and post another graph soon.