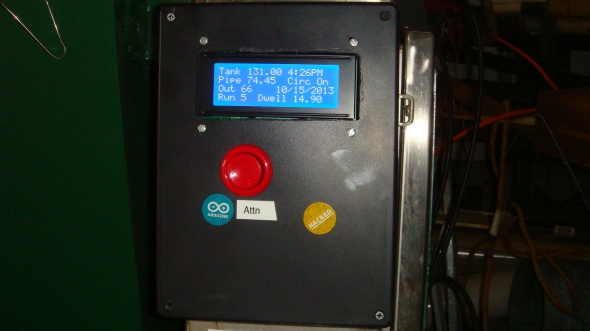 This time of year in New Hampshire it is warm days and cool nights.  Pleasant for the most part but it is still fall.  There can be some rainy raw days that need a touch of heat and to heat the hot water or maybe the day is warm enough but just cloudy so you want to heat the hot water for showers.  So in other words the boiler can often run for 3-4 hours per night, maybe one or two evenings per week.

Shutting the unit down before the upgrade consisted of unplugging the unit which includes all the controls except the draft fan.  This of course shuts off the feed and everything else but the fire still burns the remaining fuel.  I keep the draft fan on to minimize any smoking that might occur otherwise.  I live on the second floor of the building and the boiler is on the first floor so typically I would walk down unplug the unit, take a shower and then go back down and unplug the draft fan.  More than once I have had to go down later after forgetting to unplug the draft fan.  So I added a physical button, the Attn button, to the front of the control panel, and rewired the control box to relay control the draft fan.  Now with a minor software change made I can go down hit the button and the unit shuts the auger feed immediately and then after twenty minutes turns off the relay for the draft fan.  It’s so cool my girlfriend wants to go push the button.  Can life get any better?